Spirit of David began sometime in April 1997. It all starts with the famous call of God to Pastor Segun Lawal while he was taking a shower. 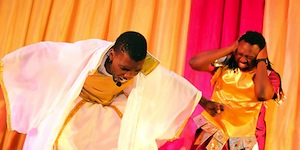 At a fellowship meeting later that night, he made the announcement asking all those interested in joining a dance school headed by Pastor Segun put down their names. Two hundred plus people signed up!

The first meeting was called but only seven people showed up that rainy Friday night – Spirit of David (SOD) was born in O.A.U, Ile-Ife, Nigeria.

Segun Lawal was rounding up his Bachelor Degree program in the O.A.U at that time.

November 27, 1997…The crowd of students grew by the minute and this was the first time a God based group was ticketing for a program. It was to be the very first Spirit of David show – UNORTHODOX – and rightly named because that’s exactly what the show was with over 3,000 students crammed into the Amphi Theatre of the O.A.U waiting, with bated breath, for the first dance to start!

The show lasted for just under 1 hour. An alter call was made after the last dance of the night and 80 people surrendered their lives to Jesus. Many joined the club that day, the fame of this crazy set of young people who love God and love dance began to spread like wild fire across the whole campus and beyond.

It’s been 20 years since Spirit of David began. In that time, so much has happened. The club has grown from 1 branch to 12 other locations around Nigeria and the world. Members have increased from 7 in Ife to over 1000 having passed through the club. There are 300 active members across the branches worldwide.

Spirit of David has hosted 95 shows to-date in over 44 cities around the world!

In 2001 SOD began her 1st tour, the 12 state road tour as the first one was called saw over 50 of her members visiting 12 different states in Nigeria including Zamfara, Enugu, Akwa-ibom, Kaduna and Kwara.

In 2007 and 2009, Spirit of David produced a TV show that saw Nigerian celebrities pair up with SOD instructions to present a vast range of dances under intriguing themes. Well over 13 million people were said to have watched the two award winning seasons!

2007 also saw the beginning of the Twin Continent tour for Spirit of David. This promised to be a mammoth task and adventure, shows and visits were to be held in 5 African cities and 5 European cities. Needless to say, the daunting task was accomplished in 2012. With the help of our wonderful partners, family and friends, over 18 cities were reached and at least a hundred members participated. Beautiful testimonies and experiences from each destination abound.

In Spirit of David, young adolescents have grown into fully matured men and women. For the last 20 years, youth brimming with untapped potential and sometimes misguided exuberance have been welcomed into the club. The constant discipline of learning and executing various dances, organizing shows in several locations, raising funds, praying and fellowshipping frequently and being accountable to others on and off stage have all produced erstwhile adult citizens of the nation.

Members, who joined since inception, are now at management levels in their various careers outside the club and are also parents of young teens. They are however still active in dance and administrative duties of the club.

Spirit of David every year admits over 30 new young people into the club, from teenagers to young adults looking for a place to belong, grow, change and learn to make a difference. Sod has become home to them and continues to be a close knit family of like passioned people who are imbibing leadership and followership principles as well as forming lifelong friendships and partnerships. 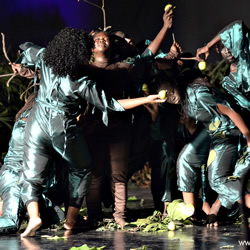 We see our partners as members of Spirit of David. You may not necessarily present on stage (and even that is debatable!) but your support is critical to even having a stage to present on.